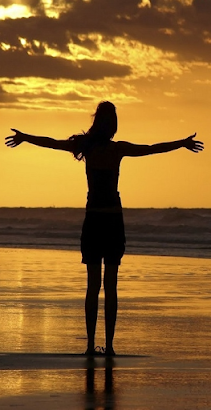 ​
Recently, I was stuck at home for two weeks with a horribly bad flu. The only time I went out was to see the doctor. I was constantly coughing and felt very tired. It was easy to feel positive at first, but as the days dragged to weeks I thought I would go nuts from doing nothing other than sitting and sleeping. I missed going out and talking to people. Basically, I felt useless.

One day, I felt so frustrated that I thought my head would burst. This anger had been gradually building up but I ignored it, trying to be positive. You know, how I keep telling everyone that it is the best attitude to adopt when we face problems. Well, it was not that easy but the good thing is that it got me to think about some deeper emotions which I would like to share with you.

Surrendering to anger
I started meditating but it did not work as I was restless. I chose to stay with the anger and allow it to come up. It does not mean going around the house breaking things, but just be still and feel it. At first, waves of thoughts came up combined with several emotions. As these cleared, I was able to surrender to the anger and relax. Gradually, I felt the tension ease from my muscles and my head felt lighter.

Acceptance
Once I moved to this positive space, I was able to acknowledge what had brought up the anger. I have quite a number of ongoing projects at the moment and it all came to a standstill for two weeks. All my plans got disrupted. There was nothing I could do about it other than wait. It was hard for me to surrender to an illness which prevented me from working and meeting my targets. At the core of all this anger was the truth that I could not control my life and I refused to accept it.

Are you in full control of your life?
The answer is simple, no. However, accepting this answer is not straightforward. We all have a certain level of control, but some situations arise where there is nothing we can do, other than change our response. For example, you might be fully prepared and confident for a job interview, but on your way there, you are stuck in traffic. An hour later, you are still sitting in the traffic feeling frustrated and desperate with a number of ‘what ifs’ coming up. What if I have I have missed my chance? What if they refuse to see me another time?
Even if you cannot control the traffic, you can choose how to respond. You can carry on feeling irritated or you can accept what is happening. Taking some nice deep breaths in definitely helps. This behavioural change will reduce your stress. Traffic or bad weather are easy examples. They come up a lot and we get used to them.

Yesterday I was catching up with a friend whose wife left him last year. We spoke about how he felt angry back then as he could not control the situation. They tried counselling but it did not work. After a few months, he finally accepted that there was nothing more he could do to change her mind as she had already moved on. He is now enjoying his new freedom and has regained some level of control over his life in a healthy way.

I would like to share with you The Serenity Prayer authored by the American theologian Reinhold Neibuhr. These words have a soothing effect on me and I hope it does for you.


"God give us the serenity to accept what cannot be changed,
The courage to change what can be changed,
And the wisdom to know the one from the other."