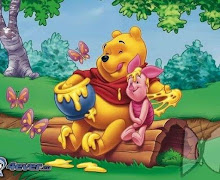 We grow old
because we stop playing.
~George B. Shaw~

The Power of Pooh
Once upon a time, there lived a bear. His name was Pooh. When I read his stories as a child, I often wondered if he was a sweet and happy bear because he ate too much ‘hunny’. Even on the most bothersome days, he found a way to see life positively. My favourite line was when he said, ‘Think about all the exciting things that are going to happen to-day’ (particularly on Monday mornings).

Now that I experience life as an adult, I can see that there was something other than ‘hunny’ that kept Pooh always happy. He was a Bear of Very Little Brain! His simple-minded nature protected him from stress that often comes up with too much thinking. Benjamin Hoff illustrates this beautifully in his book ‘The Tao of Pooh and The Te of Piglet’ when he describes Pooh as a childlike being who represents the Taoist concept of effortless being. Well, A.A. Milne did say that he hadn’t written the Pooh for children in the first place.

Simplicity
One of the basic principles of Taoism is the Uncarved Block, meaning that power resides in things which are still in their simple nature. Power is lost when simplicity is lost. The power of Pooh is achieved through simplicity, like the Uncarved Block. This is reflected more through the contradictory nature of some of the other characters:
Wise Owl shows how some people who think they know a lot might in fact not know much at all. They give their opinions even if no one asks for it. They can overthink to the point of confusion while simple Pooh finds a solution easily.
Miserable Eeyore keeps complaining about life and ends up creating imaginary gloomy problems. People with this whining behaviour develop a low self-esteem and become powerless as they believe in it. They don’t know how to enjoy the present moment, unlike Pooh.
Bouncy Tigger is the over-enthusiast who believes that he can do everything. He is always good at starting something but not completing it. People like this are too excited and cannot control their impulses. Hence, they never achieve anything.

Our Inner Child
Children’s stories always have happy endings, unlike the newspaper articles which we read as adults. It might feel weird to pick up a story book to read it for yourself. It could even feel like a waste of time as what happens in there doesn’t happen in real life. We have more important things to do or think about, right? However, it can turn out to be extremely therapeutic. 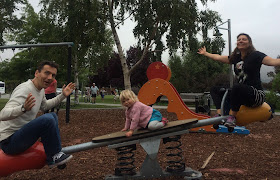 Have you noticed how you naturally feel happy when you read a story to a child? You might make a funny or deep voice to imitate the characters or your eyes broaden and your arms flap like wings. You get caught in the story and you join in the child’s excitement. Similarly, when we play with a child it brings up our carefree nature. We chase them, get down on our knees and crawl around. We would probably feel ridiculous if we were to behave in the same way with adults. I think of it as a form of meditation in itself.


Our inner child is still right here within us. We might have forgotten it as layers of responsibilities and problems covered it over the years but it never left. It patiently waits for each opportunity to come up and be acknowledged again. You know, we don’t necessarily have to wait until we are around kids to feel this same innocent happiness. We can treat ourselves to it at any time simply by picking up a book, watching a cartoon or singing a silly song.

Only thinking about another person can get the brain all wired up. Even while meditating it can be challenging to let go of stressful thoughts completely. The good thing about playing is that our inner child who was once unburdened by experience resurfaces. It gets engrossed in fun and there is no time left to think about anything or anyone else.

All worries vanish and we turn into … Pooh!

Create your own version of a pot of ‘hunny’.
Mine is a tub filled with different teabags.
When I feel low, I make myself a nice cuppa to cheer up.

What will yours be?